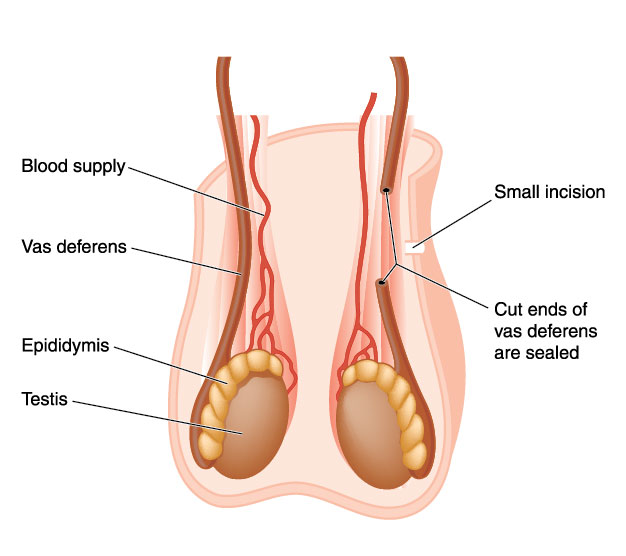 Usually a small incision is made on either side of the scrotum over the vasectomy site which is usually palpable. The scar tissue from the vasectomy is cut away and flow of sperm from the testicular end is looked for. A very fine probe is passed down the other end which is also cleared of the scar tissue. Sometimes the gap between the two ends is too large to successfully bring the ends together.

The two ends are then stitched together using very fine material with the aid of the operating microscope. The skin is closed using stitches which will dissolve in about one week to ten days. There will be some swelling after the operation which is likely to be more than experienced when undergoing the vasectomy. For that reason a firm pair of underpants should be worn.

When the procedure is over the patient will spend a short time in the Recovery Room where the Nurses will monitor him closely by checking his pulse, blood pressure and breathing until he is ready to return to the sitting area.
Prior to returning to the sitting area he will be able to get changed back into his clothes.
It may be necessary for the Nurse to check his pulse and blood pressure while he is in that area.

At this stage he will be allowed to have something to eat and drink and it is helpful if he drinks a good amount of fluid and continues the intake so that he is consuming 2-3 litres of fluid per day.

Alcohol should be avoided for the next 2 days after the procedure. Alcohol dilates the blood vessels and can result in further bleeding and swelling
Medications taken for other medical conditions should be continued unless specifically stopped by the Surgeon.

The likelihood of a baby depends on the length of time from the vasectomy to the reversal. Overall patients undergoing this procedure may expect around 50-60% success. The success of sperm in the ejaculate is often higher than that. However in some men substances called anti sperm antibodies can react with sperm to prevent them being successful at fertilisation. Anti sperm antibodies develop when the vasectomy is carried out and the sperm come into contact with the blood stream and the immune system treats the sperm as foreign rather like an infection and makes antibodies against them. In some cases, that is able to be treated successfully with medication and a pregnancy results.

Some of the stitches are internal and will dissolve. The skin stitches will also dissolve in about 7-10 days and fall out by themselves.
If the wound becomes increasingly painful or if any discharge is noticed then the patient should either phone Dr Gordon's rooms or see his General Practitioner.

If there is any bleeding from the wound, the wound should be pressed upon at the bleeding site using a gauze swab. That pressure should remain uninterrupted for a period of 5 minutes as timed by a standard clock before removing the gauze or the pressure.

If the period of time is interrupted then the 5 minutes must be restarted. Should that not cause the bleeding to stop then the Doctor should be notified.
The patient will need at least 1-2 weeks off work, resting (lying down with the feet slightly elevated which reduces swelling and pulling on the re-joined site) a much as possible and avoiding driving for at least 1 week after surgery. Sitting and standing for more than 10-15 minutes at a time should be avoided.
A Scrotal support or firm underpants should be worn at all times following the procedure to help reduce the swelling.

The patient should avoid intercourse for 3 weeks after the surgery. It takes approximately 72 days for sperm to be manufactured and transported to the ejaculatory ducts. So a semen analysis is usually not carried out before then. Occasionally there may be some blood mixed with the sperm after surgery. This will settle by itself.