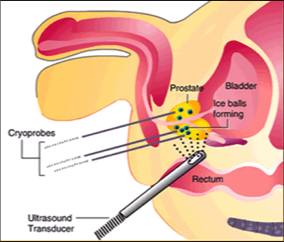 Cryotherapy therapy of the prostate is a minimally invasive procedure carried out in Day Surgery in an attempt to effect a cure for localised prostate cancer which has been previously diagnosed on biopsy and where staging has shown no spread outside the prostate gland. It is sometimes used when there is local recurrence after Radiotherapy.

As with all cases of prostate cancer treatment should be tailored for the individual patient based on the grade and stage of the tumour, the PSA level and the estimated quality of life and life expectancy based on the patient’s general state of health and other medical conditions.
Cryotherapy may be used as primary treatment. That is, treatment instead of Radical Prostatectomy, External Beam Radiotherapy or prostate Brachytherapy or patients who have had failure of radiotherapy and have localised prostate cancer recurrence.
Unfortunately complications associated with patients who have had previous Radiation Therapy are somewhat higher than those having primary treatment.

The patient is required to fast (having nothing to eat or drink) for six hours before admission. On the morning of admission to hospital the patient will be required to use a small enema in order to empty the bowel appropriately.

The patient is given a general anaesthetic (put to sleep completely) so that there is no pain.
A digitally enhanced Ultrasound probe is inserted into the patient’s rectum (back passage) which enables viewing of the prostate in horizontal and vertical planes in a similar fashion to Transrectal Ultrasound for Biopsy. The prostate is then viewed on the LCD screen and a special grid template maps the size of the prostate and the positions for freezing. A series of very fine hollow needles are then placed through the holes of the template into the prostate gland. This is carried out through the skin behind the scrotum (testicles) and in front of the rectum between the legs.

Once the needles are in the appropriate place as checked on the ultrasound, Argon gas is used to freeze the prostate tissue in measured amounts around the needles.Helium gas is used to warm the frozen tissue and then the freeze/warm cycle is repeated. Warming of the areas where freezing is not required is simultaneously carried out.
Warming probes and temperature probes are passed in between the rectum and the prostate to ensure that the bowel is not frozen and subsequently damaged.
In addition a special warming catheter is placed down through the penis into the bladder to warm that also so that there is a reduced risk of damage to the urethra (pipe).
The prostate is cooled to a temperature of -40° C.

During the whole procedure the patient’s upper body is kept warm with a special warming blanket and intravenous fluids and antibiotics ensure the patient is well hydrated and there is minimal risk of infection.

Following the procedure the patient is woken from the anaesthetic, a dressing pad will be present between the legs behind the scrotum to reduce the risk of bruising and swelling.It is usual for there to be some swelling of the skin of the penis and scrotum. A catheter will be present in the bladder draining the urine. That will stay in place for a few days and an information brochure (Management of Indwelling Catheter © 2006) will be given to the patient for instructions regarding management of the catheter.
The patient will remain in bed while the nurses carry out the routine observations and monitoring following surgery. These include, monitoring of the patient’s temperature, pulse, blood pressure and respiratory rate. When the patient is suitably awake he may start eating and drinking as tolerated. He will remain resting in bed for a period of 2-3 hours.The patient may find the need to open his bowels. This is normal and may result in the passage of watery liquid. This is the saline solution which is used to warm the bowel at the end of the procedure. He will be able to be discharged from hospital after having been reviewed and discharge deemed appropriate.

Medication for pain relief will be prescribed as appropriate. Generally speaking medication such as Panadol and Panadeine Forte are sufficient.

Generally speaking if a patient is having difficulty getting erections prior to the procedure then that is likely to still be present or worse afterwards. Impotence is a risk of all treatment of prostate cancer because of the fact that the blood vessels and nerves that cause erections lie immediately adjacent to the prostate and are likely to be affected by treatment in that area, whether it is Cryotherapy, Brachytherapy, External Beam Radiotherapy or Surgery. Many patients have achieved return to normal erections without assistance post operatively. Most will require assistance with medications or appliances for up to 12-18 months post operatively. Approximately 30% will require continued assistance if they wish (medications or appliances).

While the procedure is approved by the TGA (Therapeutic Goods Administration) there is no Medicare item number and therefore no rebate for insurance. The procedure is invoiced pre-operatively in order to purchase the disposable items. These include the probes, needles, gases, medications etc. The cost for the hospitalisation and surgery is all inclusive in addition to the immediate post operative care.
Medical expenses may be claimable as a tax deduction on income tax returns.

A randomised controlled trial occurs when a Doctor is testing to see whether a treatment works because the operation or radiation or medication is effective because of the way it works or through chance or luck. It is done to show that a treatment actually makes a difference and the patient would not have had the same result by just waiting to see what happens.
It is carried out by giving a group of patients as much information as we know about the treatments that are being tested including the expected benefits, side-effects and risks of the treatment compared with not having any treatment. The patients then consent to being in this trial (experiment). The patients are then randomly selected for the treatment (either treatment A or treatment B) by placing their names in a hat (for example) and then allocating a treatment based on that. In this way the Doctor or patient is not biased toward a particular treatment and we can truly find out if something works or not. If, after a short time, it appears that a treatment is no good and causes harm, the trial may be abandoned so that the conclusion is that the experimental treatment does not work.
In a randomised controlled trial comparing External Beam Radiation Therapy as primary treatment with Cryoablation in localised prostate cancer carried out by Donnelly et al1 it was concluded that at three years the results from EBRT are marginally better (EBRT 85.8% vs. Cryo 82%) but at the end of four years the results from Cryotherapy show somewhat greater improvement (EBRT 74.6% vs. Cryo 80.1%). Overall the results for control of the primary malignancy can be regarded as equivalent (Table).

* ASTRO (American Society for Therapeutic Radiology and Oncology) defines failure as PSA nadir + 2ng/ml increase.
** Death from Prostate Cancer.
1.Donnelly BJ, Saliken JC, Brasher P, Ernst S, Lau H, Trypkov K.
A randomised controlled trial comparing  external beam radiation and cryoablation in localized prostate cancer. JUrol 2007; 117:376-377. AUA meeting abstract #1141.
Update
FRIDAY, March 21,2008. (HealthDay News) -- In men with localized prostate cancer, cryosurgery alone provides long-term disease control equivalent to that of surgery and radiation with much milder side effects, according to a landmark study published in the March issue of Urology.
Jeffrey K. Cohen, M.D., of Allegheny General Hospital in Pittsburgh, Pa., and colleagues analyzed data on 370 patients who underwent prostate cryosurgery as primary monotherapy between 1991 and 1996.
After a median follow-up of 12.55 years, the researchers found that biochemical disease-free survival rate at 10 years -- defined as nadir plus 2 ng/dL -- was 80.56 percent for low-risk patients, 74.16 percent for moderate-risk patients and 45.54 percent for high-risk patients. They also found that the 10-year negative biopsy rate was 76.96 percent.
"Acceptance of cryotherapy as a viable therapeutic alternative for prostate cancer has steadily grown over the past decade," Cohen said in a statement. "It is still considered controversial by many as a primary treatment modality, however, because of concerns about the procedure's long-term efficacy. Our study's findings allay that concern, particularly among low-risk patients."

Treatment of localized Prostate Cancer may be carried out to the focal areas which were found to be positive  according to the Pathology Report of the TRUS and Biopsy.This means that only that area of the gland is targeted with the freezing needles, preserving the remaining tissue.There are a number of advantages of this type of treatment which include: shorter procedure, treatment to organ-confined tissue, reduced risk of impotence as the nerves on the other side of the prostate are completely avoided. There is a disadvantage in that there may be areas in the other side which are not targeted but these can be dealt with if (or when) they are detected. This has been reported as 4-8% in the untreated side.

The cost of the procedure is reduced because of the reduction in cost of consumables and the reduced time of surgery.