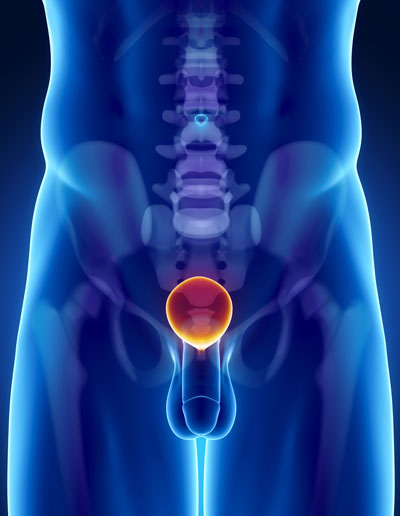 If the Doctor has recommended that you have a TRUS and Biopsy it is usually because the Doctor is suspicious that you may have a prostate cancer within the prostate gland.
Before the procedure is carried out it may be necessary for the patient to use an enema to empty the bowel. Instructions will be given regarding that.
Sometimes infection can occur because of the procedure being done through the back passage. For that reason the patient is usually treated with antibiotics before and after the procedure to reduce the chances of infection.
The Ultrasound instrument is placed into the back passage in a similar fashion to the Doctor examining the prostate with a finger.
A TRUS is carried out with the patient on his side in a similar position to a Digital Rectal Examination (DRE). It is uncomfortable but not usually painful.
A special needle (Biopsy needle) is guided using the Ultrasound to any areas that look abnormal and they are sampled.
The gun that is used to fire the needle sometimes make a loud click and will usually be demonstrated prior to the patient undergoing the procedure so that the sound does not make the patient jump.

If there are no obvious areas seen on the Ultrasound then Biopsy specimens are taken from the areas of the prostate which are more likely to turn into prostate cancer.That is based on surveys on millions of men who have developed prostate cancer.
The Ultrasound and Biopsy may be carried out instead of the routine operation on the prostate called a Transurethral Resection of the Prostate (TURP).
That operation is designed to improve men's symptoms such as hesitancy (standing and waiting to pass urine), poor stream, terminal dribbling, nocturia (getting up to go to the toilet at night), dysuria (burning or stinging), frequency of urination, incontinence and blood in the urine.
Quite often men with prostate cancer have no symptoms at all and therefore it is not necessary to do an operation of the TURP type.

Occasionally after a Biopsy some bleeding will occur. There may be blood in the urine and there is almost certainly likely to be blood mixed with the sperm at the time of ejaculation. Bleeding may be present for up to some weeks and is usually not of a serious nature and stops by itself.
There may also be some blood mixed with bowel motions.
If the patient develops chills and fevers after the procedure then the patient should get in touch with the Doctor or attend the Accident and Emergency Department of the nearest Hospital as it is likely that the patient has developed an infection which will require further antibiotics.
Patients may continue taking aspirin or aspirin containing products.
Occasionally there may be more bleeding as a result.
Aspirin is recommended to reduce the risks of heart attack and stroke.

Patients must not be taking Warfarin or Warfarin related (anti coagulant) products around the time of a Biopsy.
Occasionally there can be some swelling of the prostate gland after the Biopsy, leading to difficulty in urination. If that happens, and the patient is unable to pass urine at all then the patient should go the the Accident and emergency Department at the nearest hospital where a small tube called a catheter will be inserted through the penis and into the bladder to drain the urine out. How long that stays in place depends on a number of factors including how much urine is in the bladder and whether the patient has had any trouble passing urine prior to the Biopsies being taken.

Sometimes a prostate cancer is not found in those specimens and the Doctor remains suspicious that there may be a very small one there already or one may develop in the future. If that is the case then the Doctor will inform the patient and discuss further follow-up appointments and investigations.
If a Biopsy is positive (shows that the patient has cancer) then it is likely that the patient will require further tests to see whether the cancer is just in the prostate gland or has spread to other parts of the body. That is called Staging.

The Pathologist will also Grade the cancer by giving it a Gleason Score. This is a number from 2 to 10 which is a method of attempting to judge how bad it might be.

It is only after those tests have been completed that appropriate treatment can be discussed. It is often helpful if the patient has a close friend or relative with him at the time so that there is no confusion regarding discussions.